On May 28 2015, the Oxford Union scheduled a debate with the motion “This House Believes Britain Owes Reparations to her Former Colonies.” In preparation for the debate, the Oxford Union promoted a cocktail called the “Colonial Comeback” which was advertised through a poster with a picture of shackled black hands above a drink with a few ice cubes and lemon halves. This casual approach to offensive imagery exemplified the carefree way that the Union engaged with colonial history, an attitude that was rarely challenged in Oxford tutorials and lectures, in the Oxford community, and in the national discourse. 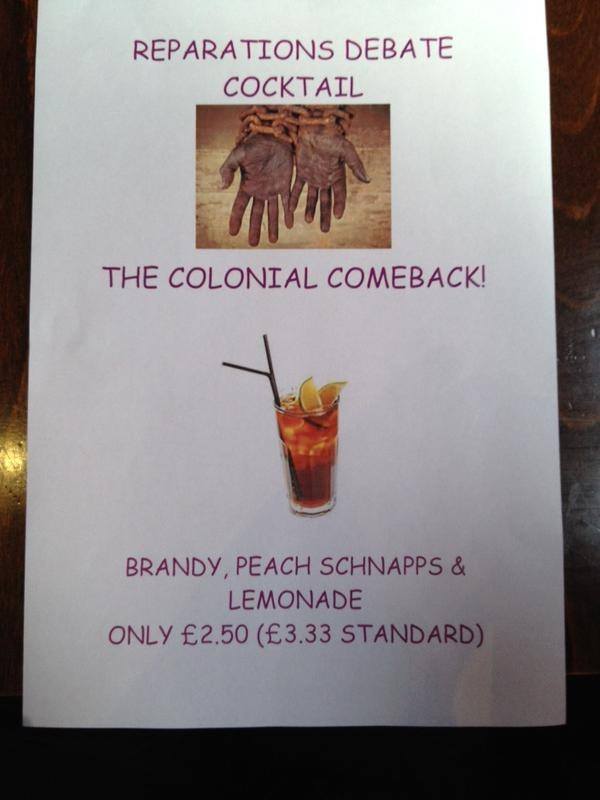 RMFO had formed very recently and were due to protest the Oxford Union debate, however when students had seen the poster at the Oxford Union bar they demanded that the Union must be held accountable for this racism. Reactions on Twitter grew into a wider discussion within the media and the university, leading to an apology from the Oxford Union. RMFO recognized that this apology was not adequate, that this was not just an individual case about a cocktail, and that this was in fact an institutional problem. During the debate at the Oxford Union, RMFO held a silent protest. Students held posters saying “Who will speak for us?” to call attention to the ways these debates often excluded the very voices that should be centered in the debates.

Even though the Oxford Union had a BME officer, the officer was never given the opportunity to explain her outrage over the poster and did not meet with the BME officer despite multiple requests. This lead to their resignation. The institutional structures that deny students of color, even those that are BME officers in the Union, a place to react to events like the debate at the Union shows the reason why protests are a necessary tool to counter racism at Oxford. After many inadequate apologies, the Oxford Union finally admitted they were institutionally racist.

During the discussion about the cocktail many student movements and national movements were also bringing awareness to issues of colonial legacy and racism. In the midst of movements like Rhodes Must Fall in South Africa, it was evident that these issues were not isolated. A movement was needed at Oxford university were colonial ideology had been produced and where colonial attitudes continue to be reproduced.